The Real Property Market of North India - an Insight

Decades after the real estate giant DLF developed Gurgaon, the realty boom in northern India has been creating ripples ever since. Initially it was Gurgaon that emerged as the hottest property destinations in Delhi/NCR during the mid 2000s. Then on the other part, Noida in Uttar Pradesh also started gaining popularity as a realty destination. As the country’s economy started gaining new grounds, the real estate landscape also underwent tremendous changes. Now, in the last five years, major cities across north India has joined the realty boom bandwagon. Among them tier II cities like Chandigarh, Jaipur and Manesar are worth mentioning. The real estate market, especially the residential segment in these cities has proliferated rapidly over the last five years. Affordable Flats in Chandigarh, Jaipur and even Manesar have been experiencing a huge demand among the end users.

Coming back to the real estate scenario of the nucleus, that is Delhi/NCR, surrounding areas have been developing at a great pace; so much so that new areas are being included with each passing day, though most of them are nondescript. Mahendragarh and Bhiwani in Haryana have been announced to be a part of NCR. Developers are queuing up and investors are banking on the capital values of these regions. At a more recent event, Bharatpur in Rajasthan, known for its famous Keoladeo Bird Sanctuary has also been declared to be included within NCR. Though the property market in the region is yet to develop, but industry experts opine, that the market will develop pretty soon. It is estimated that these areas will experience at least 15 percent rise in the property prices. So, properties in Bhiwani and Mahendragarh, now available at a price of INR 3000 on an average are bound to increase to at least INR 4000 in the next four years.

Barely a year or two old, the residential property segment of Bharatpur, is already selling at INR 1500 per square feet while the industrial plots come at a cost of nearly INR 200 per square feet. The government’s plan for the development of a rapid rail transit system is expected to add to the realty market of these areas.

On the other hand, Bhiwani, 125 kilometres from Delhi and Mahendragarh about 70 kilometres has already witnessed the foraying in of top international brands in retail; and some leading finance companies have also set up operations in these regions. These are all signs of a bright future of the property market of these areas. At the Rajasthan front, in Bharatpur, builders have already started constructing in-roads. Demand for residential apartments has increased in areas like Manesar, Bhiwadi and even Bharatpur.

The industrial hub of Bhiwadi in Rajasthan is one of the fastest emerging residential townships in northern India. Spread over nearly 5300 acres of area, Bhiwadi has long attracted a lot of attention from investors and developers. Real estate developers have been highly instrumental in developing the property landscape of Bhiwadi. The township today boasts of the presence of well-known developers, like Omaxe, Avalon and Ashiana.

Moreover, the rapid infrastructural developments, like the expansion of the Honda factory has seen an increase in the workforce of the area which in turn has had a positive impact on the real estate market.

This is a guest post by Sampurna Majumder. Currently she is writing about latest trends related to real estate.

What lessons can real estate sector in India learn from Aam Aadmi Party?


Well, it’s been an incredible journey for Aam Aadmi Party. Although still in its nascent stage, the party has chosen the path less traveled by political parties so far in India. The party was the product of anti-corruption movement in India with Anna Hazare at its helm. However, due to internal differences among the anti-corruption movement members and a burning desire of the leaders of Aam Aadmi Party (AAP) to make a substantial change to the Indian political system led its entry into formal politics. If the anti-corruption movement was all about putting pressure from outside on the political system in India, the members of Aam Aadmi Party has vowed to make a difference by getting inside the political system. The party is led by Arvind Kejriwal, who has a substantial track record in Indian Revenue Services, RTI activism, other NGOs, and joining Anna Hazare for bringing in Lokpal bill in India.

As things stand in Real Estate sector in India, there is this need to clean up the sector. Property transactions, construction, track record of real estate developers, soaring home prices, housing shortage, etc. are issues that require immediate clean up. And it is in this environment, what we need is a set of leaders who can change or rather clean the existing system and processes. These leaders can be real estate developers, architects, policy makers, or entrepreneurs looking to enter the realty sector in India. What can these new set of leaders learn from the spectacular achievement of Aam Aadmi Party?

Just like Arvind Kejriwal stood against Sheila Dikshit and did not play safe, the leadership in real estate sector needs to take big risks. For example, a builder can come into the real estate sector and act transparently and professionally. Why don’t we still see any real estate developer selling their projects based on the carpet area? Why don’t anyone of the developer state the actual project completion time instead of the industry trend of 3 years? Each one of them knows that the project will be completed in close to 5 years, then why don’t they say it when selling the apartments to customers. Most developers still play safe and the result is that we have a real estate sector which is perceived as corrupt.

Aam Aadmi Party did not have the resources to compete with well established political parties such as Congress, and BJP. Neither, they had money, nor the backing of big corporate houses. Still, they had the passion, hunger, and discipline to win against all odds. Remember how the established parties will use volunteer by paying about 5000-6000 Rupees in reaching out to voters. AAP simply inspired the existing resources such as volunteers and media to take their message forward to the voters. Similar results can be achieved in realty sector with the contribution of honest government officials, set of developers, and media. The sector would go a long way if few of the government officials simply don’t sit on project approval files and sanction the real estate projects on their merits rather than on black money, and the developers focusing on completing the existing projects rather than building the land bank by diverting the funds.

Aam Aadmi party declared their funding, processes, volunteer model on the website for everyone. They also carried out internal surveys and declared the survey results along with the methodology and data for anyone to scrutinize. Even after the election results, they had been consistent in their approach to sit in the opposition rather than form the government by any means. Contrast this with the political maneuvering we see in India wherein MLAs and MPs are bribed, traded to form governments. Similarly, a set of real estate developers and entrepreneurs can stand on their principles of fair practices, no bribe, timely execution and delivery of projects. And all of this will put pressure on the established developers to fall in line and ultimately sector as a whole will benefit.

Aam Aadmi Party simply did not get lucky and did so well in elections in a year or two. They had been at this anti-corruption movement for about a decade. From Anna Hazare to Arvind Kejriwal, they have persisted with their idea of cleaning the system. Real Estate sector demands that kind of perseverance to truly achieve results. Policy makers will not change over-night and bring in transparent systems of project approvals, financing, taxes, etc. One has to persevere and put pressure on the system continuously by leveraging the support of media, and customers.

What is the Return on Your Investment? Find the detailed analysis of returns on Gold, Silver, Property, Stocks, Bonds in India!


What is the Return on Your Investment? Analysis of returns on Gold, Silver, Property, Stocks, Bonds in India | Create infographics
Follow @sach_gupta


How does one justify his/her returns on investment? Simply, by comparing the price point at which they bought and the current/latest price point. Until recently, justifying one’s return on residential property investment was difficult due to lack of credible data. However, now, one can get sense of housing prices appreciation across different cities in India and micro-markets within a particular city. The data is assembled by the team of National Housing Bank and can prove to be very useful for people looking to invest in housing across India.

Here is a trend for housing prices appreciation till quarter July-Sept 2013. 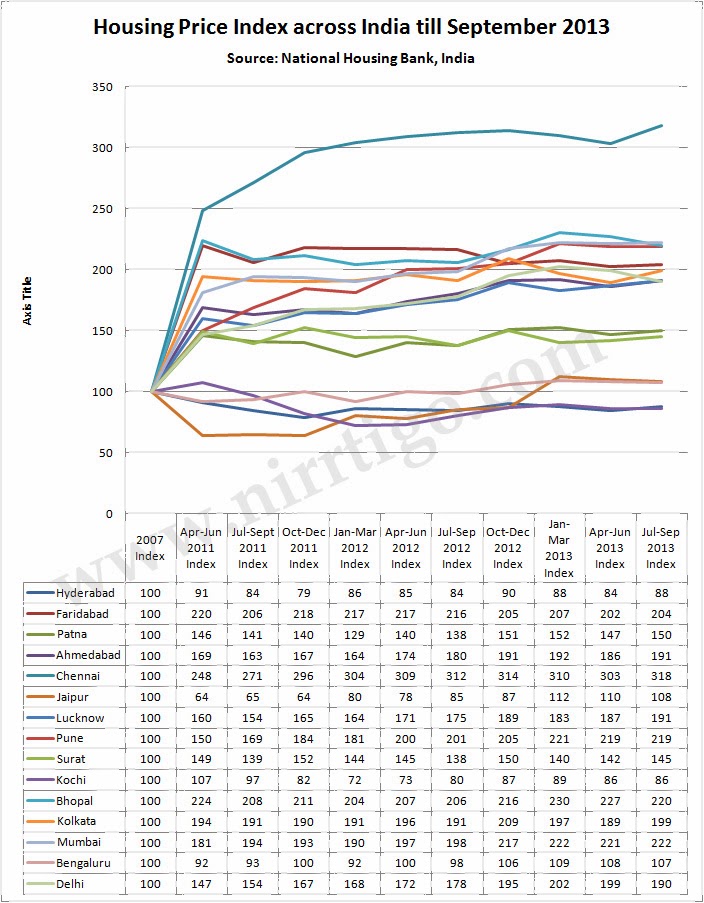