Everyone today wants a luxurious home in India. Due to this, even small developers are looking at building beautiful and fully equipped luxurious homes in India. Earlier, foreign investors couldn’t invest into an Indian real estate project that was below 50,000 square meters. This number has now been changed to 20,000 square meters, which is beneficial for small land owners. Also, foreign investors, if invested in a developing project, weren’t allowed to withdraw or transfer their ownership stake to another interested investor. The investor had to wait for a minimum of three years after the completion of the project.

But the newly pushed reforms now give the foreign investors the liberty to transfer or take out their money from the project. However, this process would require the approval of the Indian government.

These changes are sure to attract more overseas investors to invest in Indian infrastructural housing projects. Apart from the bigger developers, these changes will benefit small developers too. The investment is sure to give smaller developers a much-needed backing to build more comforting and facilitated housing properties.

Due to these revised changes pushed by the current Indian government, the real estate market has a considerable improvement in foreign investments that will help developers to build great projects in different states of India. Many developers have started mid-sized projects offering luxury apartments in Chennai, Bangalore, Hyderabad, Mumbai, Delhi and more.

Analysts say that the passage of this bill will have positive implications for the real estate sector of India. It will help to boost the realty economic growth, which in return will provide developers to create advanced modern and urban housing spaces with high-quality. The approval of the bill is still in a debate in the parliament, but sources have pointed that the government is planning to take back the amendments proposed. They may roll back all the six changes proposed in the Land Acquisition Bill. But these changes made for foreign investments have bought a drastic shift in the real estate industry. The reforms will help developers to build big and better luxurious homes, boosting the housing infrastructure and development in India. Buy your luxury apartment in Hyderabad, Chennai, Bangalore, Delhi or Mumbai today.

Why is Property market still in doldrums??

Why is real estate market still in doldrums?? Many say, it’s because of BJP Government. But is this good or bad?? Let’s find out.

As we all know, property market in India thrives on cash (or unreported income). As long as cash is being pumped into the realty market, it thrives and investors make merry. However, the Narendra Modi government's efforts to uncover black money have reduced the generation of black money in the system. The impact of this change will become more pronounced in the coming months.

"With the new Black Money Bill (which was passed by the Parliament on May 26) and with the Cabinet approving the Benami Transactions Bill in May this year, the crackdown on Black Money will continue further. 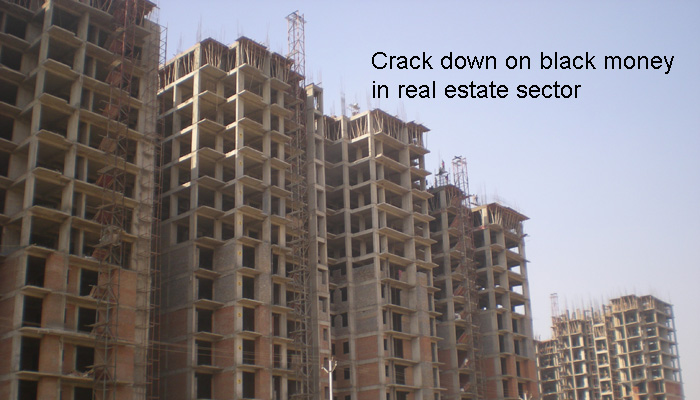 All these steps by the Narendra Modi government have impacted the realty market in short term; however, it's a step in right direction (if we look at the long term prospects).

For too many years, people avoided taxes and pumped that cash into realty market. Consequences of such theft (avoidance of tax) meant property prices were shooting (almost doubling in 2 years). People parked their unreported income into real estate. Some bought 8 flats, some bought 15 plots. It was crazy. Real estate became the best asset class to make money in short period of time.

However, working class (or salaried class) was suffering because of high values of real estate. They could not buy their dream home. Their dreams of owning a home was fading, slowly but surely. Congress party did nothing to stop this mad rush to own the real estate.

Even though, Black Money from abroad can take time (years) to come to India. But, we have GOOD news that generation of Black Money within the country may slow down (or stop) and Property prices can become affordable for the working class and their dreams of owning a home can become a reality.

Investors can cry and they will cry, but it’s a step in right direction by Modi government. Few (maybe 1 or 2 %) investors shall not be able to decide the fate of 90% of public.

Mixed use properties on the rise in Kolkata

A ‘Mixed-use’ property or project is defined as any construction that combines residential, commercial, industrial and cultural units. These projects are steadily becoming the preferred option for real estate developers in Kolkata. The returns from mixed-use properties are much greater than properties which are just residential or commercial in nature.

Mixed-use properties provide many benefits for residents, businesses, investors and real estate developers. Home buyers prefer these properties as they are in close proximity to their work place, school or a shopping complex. This leads to less travelling time since many amenities are just a short distance away.

The residential segment in a mixed-use property provides a customer base for the commercial sections like a mall or shopping center, which makes it an attractive investment option for businesses.


Mixed-use properties are also beneficial for real estate developers. The greatest benefit is that the development risk is divided between the options provided in the project. The presence of residential and commercial properties within the project attracts both sets of buyers. This leads to a faster recoup of the investment made by the developers.

Mixed-use properties can also be restructured, depending on the requirement from the developers. The reconfiguration can lead to an increase in the number of commercial units or residential units as required.

Mixed-use projects require large tracts of land for construction and the developing regions of the city are perfect for these properties. The development of these comparatively barren regions helps attract more buyers, because of the range of amenities provided. The availability of land for these projects also leads to better planning in the region.


Earlier, these projects were rarely perceived as lucrative opportunities in the Kolkata real estate scene. However the success of a couple of early projects has altered this, making real estate developers eager to provide more mixed-use projects for the residents of Kolkata.

Summary: Construction and planning of mixed-use properties is on the rise in India. The projects cater to both residential and commercial property buyers since they provide a lot of benefits compared to stand alone complexes or office buildings.

Author Bio: One of the leading players in the real estate market, Ideal Group takes pride in its rich portfolio of world-class ongoing and upcoming residential projects in Kolkata.
at 10:43 AM 9 comments: