What impact will RBI move of changing currency notes printed before 2005 and coming Loksabha Elections have on Real Estate sector in India?


We all are aware of the fact that virtually all land deals whether large or small takes place with huge amount of money paid in cash to avoid stamp duty charges. Now, Let’s assume, there is a land transaction that is going to take place between party A and party B and the market price of the land is rupees 5 crores. As per the circle rates, the land price comes out to be rupees 2 crores. The remaining 3 crores will be paid in cash by party A to party B. Given that, RBI has announced that currency notes before 2005 needs to be exchanged. In this situation, Party B is not going to accept cash amount with currency notes printed before 2005. Therefore, it puts pressure on party A to exchange his/her currency notes with the banks. And in certain instances, party A may not be in a position to go to banks for the exchange of currency notes due to the fear of income tax authorities taking note of such huge levels of unreported income. However, it is yet to be seen what impact will there be on realty sector, but there is all the likelihood of fewer land transactions due to the RBI’s latest move to change the currency notes printed before 2005.

Elections are a democratic phenomenon, which happens every 5 years in India. There are two kinds of election namely assembly elections for respective states and general elections for parliamentary system in India. All political parties whether small or large, regional or national strive hard to win elections and form the new government. It is commonly known that to win elections, political parties use all kinds of methods from announcing distribution of laptops, offering cycles, to free subsidies. The idea is to target the voters with such schemes in order to swing the pendulum in their favor.

And to win these elections, large amount of money is spent on advertising, organizing rallies, pamphlets, banners, press, traveling to various constituencies. About Rs 10,000 crore was spent in Lok Sabha campaign in 2009. And according to some estimates, this time that figure will be between Rs 15,000 crore and Rs 20,000 crore. There is no hidden fact that, the huge amount of money required is spent in form of cash. So, where does this money come from? Well, political parties will claim that this money is raised from their followers, supporters. Who are these followers? To put it bluntly, there is no free lunch here. All these so called followers who provide cash to political parties will like to claim their spending if the party they support comes in power. These claims may vary from allocation of natural resources, tax benefits, subsidies, dissolved cases, etc.

Now, how are all these followers able to provide such large amount of cash to these parties? We all know that in India even though most businesses claim to do business by the rule of law, but in reality they do under report their income and it is that income that is ploughed in real estate, gold, or elections. All these sectors have the unending capacity to absorb unaccounted cash. Therefore it is fair to say that when elections are round the corner, the investment in gold or real estate may dip and funds may be diverted towards elections. 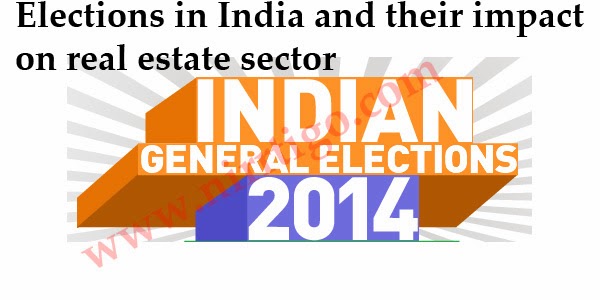 As observed earlier that during the time of elections, the funds are diverted towards political parties’ election campaign. And the sectors that suffer the most are real estate and gold. Large amount of unaccounted cash is provided to these political parties which until now would have been parked primarily in real estate. In fact, during election times one can notice the increase in distress sale activity in real estate. Since, huge amount of money is required for elections; properties worth millions are sold at below market rates to generate sufficient cash for elections. It is also highly likely that real estate developers will cut down on new launches of housing units or commercial real estate and will solely focus on selling the existing inventory.

From the end-uses point of view, it is possibly the best time to buy. One can focus on buying from secondary market or resale market. As suggested earlier, there is strong likelihood that distress sales will increase and it presents end-users with an opportunity to buy at lower rates. However, buying in secondary market means, one has to pay huge amount of property value in cash. It is also the good time to negotiate hard with the developer if one is buying directly from the developer.  Since developers are only focusing on clearing the existing inventory, it presents end-user with an opportunity to bargain hard and get substantial discounts on the property.