Will falling Rupee lead to investment in real estate sector in India by Non Resident Indians? How can property developers tap this?

During the course of this one year, at one point of time in August 2013, the rupee stood at 66.5742 against 1 US $. If not for the measures taken by RBI and finance ministry, the free fall of rupee would have continued. Exporters were happy but importers were crying and this had an adverse impact on current account deficit because of India being a net importer country.

Here is the sharp fall of rupee against US dollar in last 6 years. 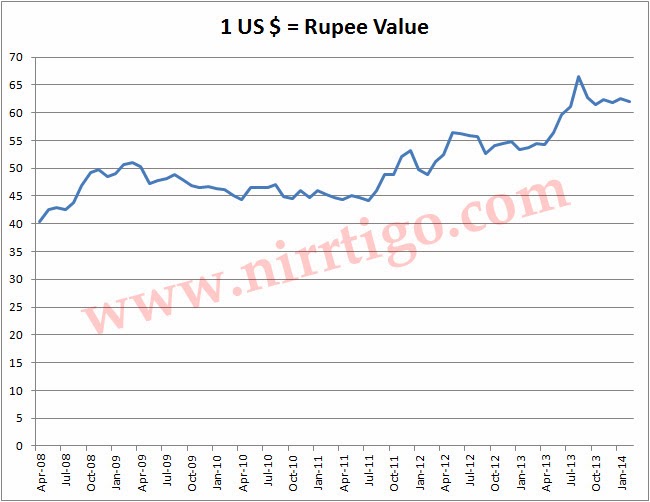 Now, the question to be asked is if the fall of rupee results in increase in NRI remittances to India? And the answer is resounding ‘YES’. According to World Bank report, in 2013 international migrants (NRIs) will remit $71 billion of their earnings back to India, highest among all developing countries. "With the weakening of the Indian rupee, a surge in remittances is expected as nonresident Indians take advantage of the cheaper goods, services and assets back home.

Here is a look at what NRIs are remitting back to India on a yearly basis: 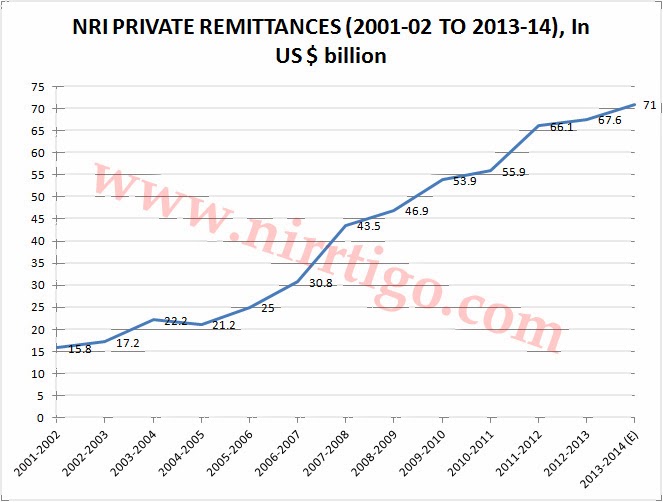 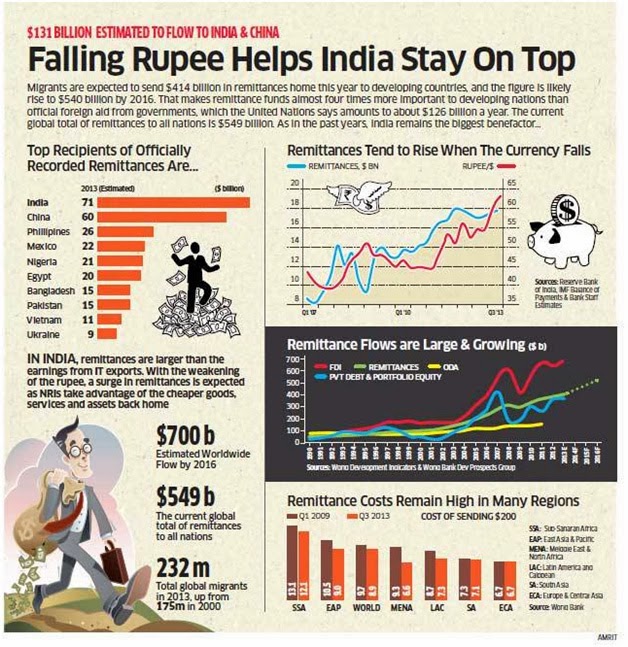 Now, the second question to be asked is, where is all this money going to? Is an NRI buying Property in India, or investing in NRE/NRO accounts, or investing in capital markets, or bond market, or in entrepreneurial activities? Although, there is little segmented data with regards to the share of each asset class, a quick look at the RBI database highlights that NRE/NRO accounts are the preferred choice by Non Resident Indians.

As per the RBI definition, Non-Resident Ordinary Rupee Account (NRO Account) may be opened / maintained in the form of current, savings, recurring or fixed deposit accounts. NRI/PIO may remit from the balances held in NRO account an amount not exceeding USD one million per financial year, subject to payment of applicable taxes. The limit of USD 1 million per financial year includes sale proceeds of immovable properties held by NRIs/PIOs. NRO (current/savings) account can also be opened by a foreign national of non-Indian origin visiting India, with funds remitted from outside India through banking channel or by sale of foreign exchange brought by him to India. Whereas Non-Resident (External) Rupee Account (NRE Account) may be in the form of savings, current, recurring or fixed deposit accounts. Such accounts can be opened only by the non-resident himself and not through the holder of the power of attorney. Accrued interest income and balances held in NRE accounts are exempt from Income tax and Wealth tax, respectively.

Whereas as per RBI definition; Foreign Currency Non Resident (Bank) Account – FCNR (B) Accounts are only in the form of term deposits of 1 to 5 years. All debits / credits permissible in respect of NRE accounts, including credit of sale proceeds of FDI investments, are permissible in FCNR (B) accounts also. Account can be in any freely convertible currency. Loans up to Rs.100 lakh can be extended against security of funds held in FCNR (B) deposit either to the depositors or third parties. The interest rates are stipulated by the Department of Banking Operations and Development, Reserve Bank of India. When an account holder becomes a person resident in India, deposits may be allowed to continue till maturity at the contracted rate of interest, if so desired by him.

There could be various reasons for preference of NRE/NRO accounts by NRIs ranging from volatility in stock markets, risks involved with entrepreneurial activities, low yield on bond market, relative safe nature of NRE/NRO accounts, and poor execution by real estate developers of their projects.

Why is real estate market in India not being able to attract NRI money to ease the current liquidity pressure? Our team debated on this issue and came out with 4Cs. 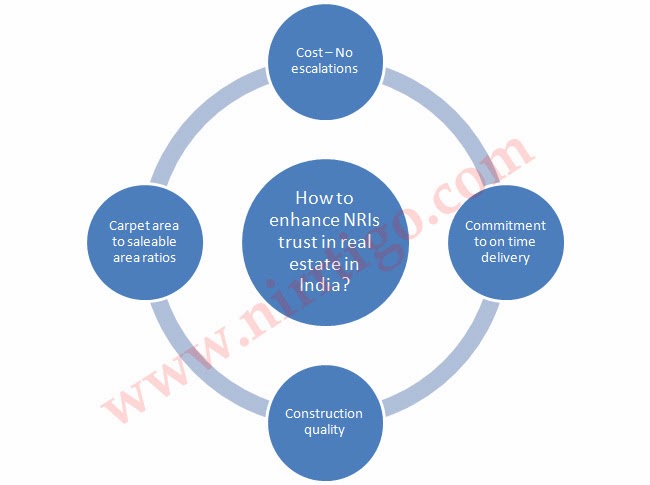 Cost - No Escalations – costs escalations during the course of the project construction has been a key detriment for NRIs wherein it has been noted that real estate developers escalate the cost of the project arbitrarily on account on various parameters such as rising labor cost, regulatory cost, and raw material cost. Why do we still observe a builder asking for additional funds from buyers for parking slots, development charges, and so on when those were not included in the builder buyer agreement at the time of selling of the project inventory? Why can’t there be transparency as far as project pricing is concerned? There needs to be more transparency in builder-buyer agreements.

Commitment to timeline – It is a common practice that developers sell their projects by claiming that they will deliver the housing units in 36 months at the time of agreement between them and the buyer. And yet, we have noticed umpteen numbers of cases where projects have been delayed by not just by 1 year but by more than 2-3 years. And in some cases, project delays have stretched to 4 years. Why can’t developers stick to their promise which they had made at the time of agreement? Or else, simply state the time it will take to develop the project (say 5 years). This matter needs to be addressed directly in contractual terms or through legislation.

Carpet area to sale-able area ratios – maintain a transparent mechanism to calculate carpet area and sale-able area. This is a regulatory function, that authorities need to address.

Along with the 4 'C', An NRI also worries about who will manage or take care of his/her Property? Sumit Bhargava bought a 3 BHK in Gurgaon, but he had to relocate permanently to UK for his work. Since, there were no Professional Property Management Company in Gurgaon, Sumit eventually sold his apartment at lower rates.

It is widely believed that if real estate developers can focus on these 4Cs, then there is absolute certainty that NRI money will flow in property sector in India at a scale unprecedented in real estate history of India and eventually it can ease the pressure of liquidity on real estate developers, and for that matter speculators, investors, banks, and other financial institutions that finance this huge economic activity.

Are the developers listening??? Real estate developers can reach our team of professionals for advisory at nirrtigo@nirrtigo.com

Appendix – I
As per the May 2012 estimates by Ministry of Overseas Indian Affairs, the population of Indians living abroad is 21.91 million. However, more than 50% of them live in high income countries and have been the major contributor to NRI money flowing in India. We present below the overall break-up of population of Indians living in high income countries: