Kisan in Demand! Are Political parties such as Congress, AAP, and others in opposition right in keeping Kisan a Kisan?

In the name of Kisan, major political parties are organizing mega rallies. Congress Party organized a Kisan rally in Ramleela Maidan in Delhi on 19 April 2015. Aam Aadmi Party followed the trend and organized a rally on 22 April 2015. Gajendra Singh of Dausa (Rajasthan) died at an Aam Aadmi Party (AAP) Kisan (Farmer) rally in New Delhi on Wednesday 22 April, 2015. The rally was organized by Aam Aadmi Party and its leader Arvind Kejriwal against the Central Government’s land acquisition bill. Gajendra Singh, a farmer from Nangal Jhamarwada in Bandikui of Dausa district, ended his life by hanging himself from the tree during the rally. And as expected, the blame game and politicization of issue has begun. Well, what we are witnessing today is the recreation of ‘Peepli Live’ in Delhi.

Various theories are floating around as to why Gajendra Singh ended his life. Was it because of crop failure due to unexpected hailstorm and nonseasonal rain? However, local officials said crop loss in Gajendra’s area had been between 20-25%, far less than the damage in many other parts of Rajasthan. Well, investigations have been ordered by the home ministry and we will get to know the truth in coming days or weeks.

However, Gajendra is not alone in this battle. Suicide has spread like an epidemic among the distraught farmers. About 158,745 farmers have taken their lives since 2004 till 2013 and 86.5 percent of farmers who took their own lives were financially indebted. 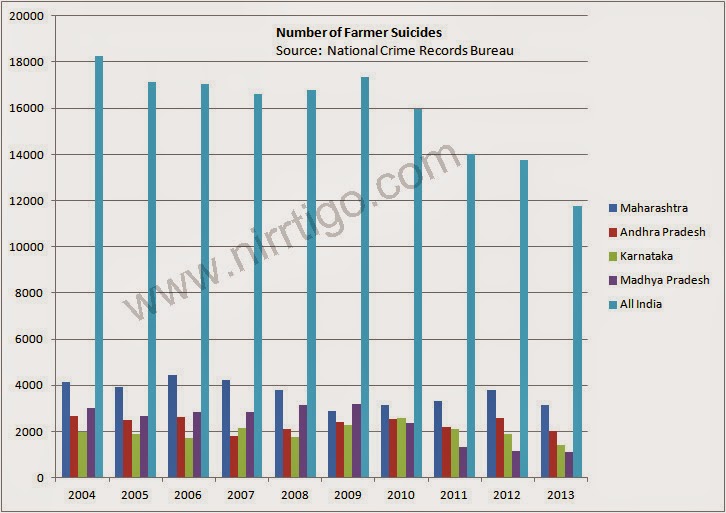 Do these so Called Pro Poor and Pro Kisan Parties really care about Farmers issues?

Now, the question that needs to be asked from so called Pro Poor and Pro Kisan parties is, ‘Should the farmer remain tied to farming for generations and live in poverty’?? A closer look at the world data tells us the complete picture: 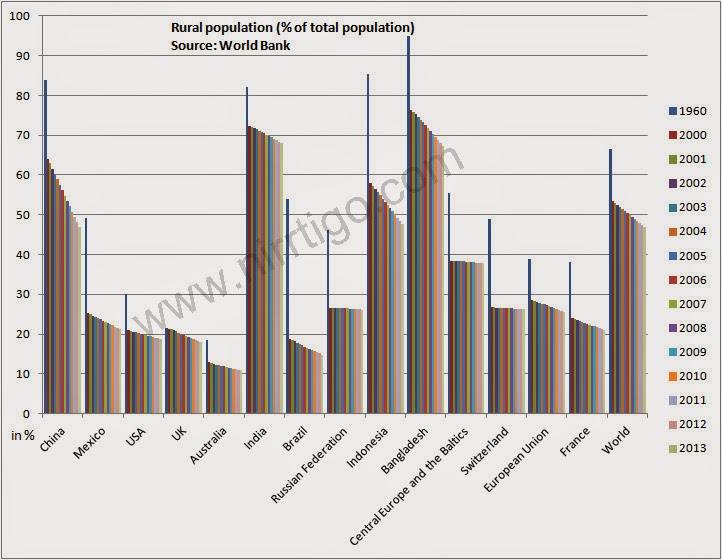 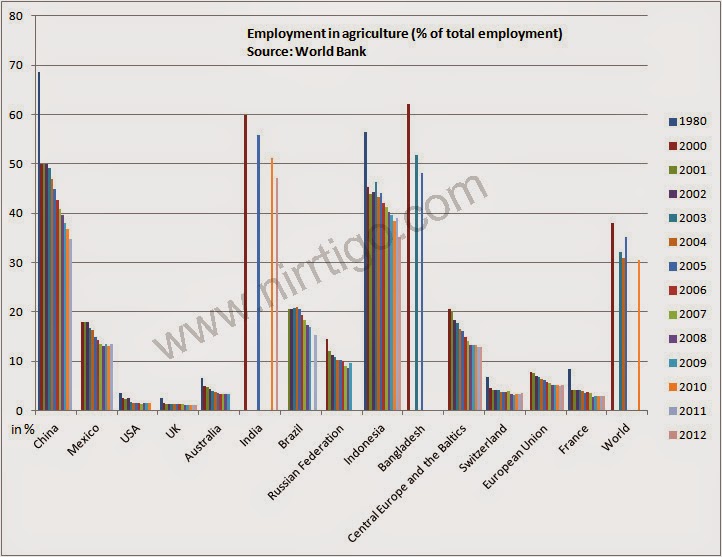 It is clearly evident from the Graphs above that rural population & employment in agriculture in India needs to come down to China level or world level. There are simply too many farmers working on the farm and they need to be put in industries to lift them up from abject poverty. To increase per capita income, to improve people’s livelihood, jobs and employments need to be created in a massive way. And Focus on Manufacturing can help in lifting millions out of poverty. 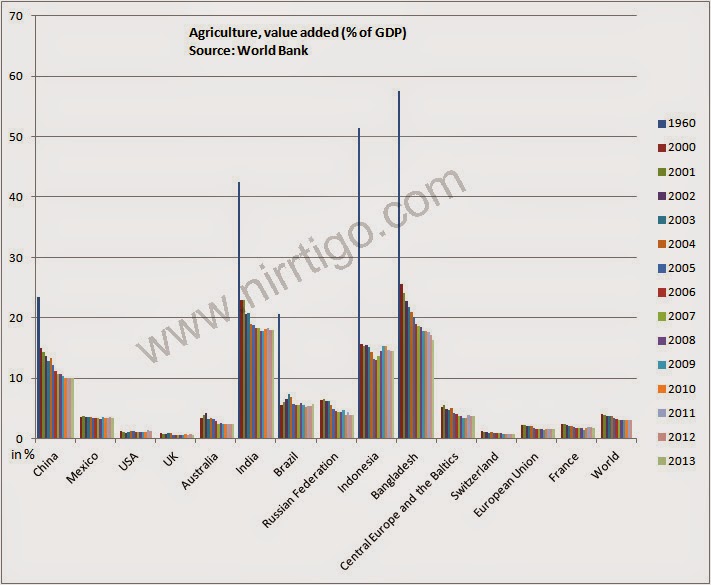 And the parties such as Aam Aadmi Party, Congress Party shall introspect and not oppose land acquisition bill just for the sake of opposing it. The bill must be debated and passed in a given time frame for rapid industrialization in India. Most farmers approach MPs and MLAs for jobs for their children in industries and not for working in farms. However, the very same farmers are incited by these parties for political gains. The focus shall not be on Bills in parliament; instead, the focus shall be on ‘how to lift people out of poverty’? 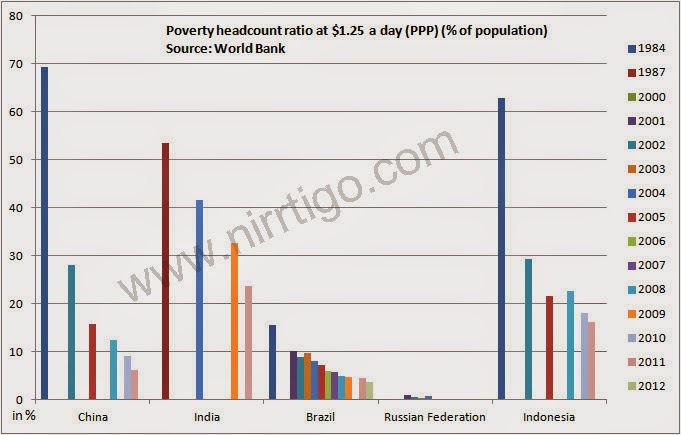 In this political slug-fest, Land acquisition Bill has now become a hot potato. Congress, Aam Aadmi Party, Left, and Janta Dal have all united to oppose the bill in Rajya Sabha. Congress Party is in such bad mood that it is opposing the laws mooted by them in first place. They failed to deliver on those laws is another matter.

For moving millions out of rural areas to urban & semi urban areas, government needs to build capacity. And by Capacity building, we mean, developing industrial corridors, housing, roads, power generation, and irrigation. And all of this capacity building needs to be implemented at a fast pace because Kisan cannot wait for entire generation to move out of poverty and live a dignified life.

In this context, Land acquisition becomes vital. Land is required for all these capacity building projects. India is in sweet spot at this stage among major world economies and domestic as well as foreign investors are willing to pump in the money to build infrastructure projects. However, land acquisition is major issue for these firms with many of them postponing investment in projects citing land acquisition problems. There are suggestions by some corners that these industrial enterprises shall purchase the land directly from the farmers. However, it doesn't seem feasible in India because of disputed land titles. And this is where Government has to step in to acquire land and then invite industries to build projects.

So, what are the main issues that Opposition Parties are against in the amended Land Acquisition Bill?

Till 2013, Land acquisition in India was governed by The Land Acquisition Act of 1894. However, following the controversies of Singur in Kolkata and bhatta parsaul in Uttar Pradesh, the UPA government in 2013 brought in a new bill called ‘Right to Fair Compensation and Transparency in Land Acquisition, Resettlement and Rehabilitation (RFCTLARR) Act’ to repeal the 19th century act. However, Industry players objected in unison saying the bill was too draconian and the bill will make sure that no land is acquired in the country thereby halting economic development.

After the NDA Government under Mr. Narendra Modi came to power, the focus shifted to industrialization in order to create jobs and economic prosperity. The new government decided to bring in following amendments to UPA Land Bill of 2013:

According to PRS Legislative Research these are:
The Congress Party, Aam Aadmi Party, Left, Janta Dal are against these amendments. Recently, Rahul Gandhi in Parliament even termed the government anti poor and pro corporate.

Is Corporate really a Bad/Dirty word??

Citizens of this country answered in big numbers that we want economic growth by voting for Modi Government in 2014 elections. If Congress Party was Pro Poor, they would not have lost the elections so badly. Because make no mistake, the real power in India lies with poor. Now that poor has voted for Modi Government, the opposition parties shall introspect and not halt economic progress of the country.

Is ‘Profit’ a dirty word? Why would an industrialist take all the risks and set-up factories if ‘Profit’ be labeled as dirty? On the other hand, so called pro poor parties shall answer; is ‘Poverty’ a virtue? Since Independence, more than 65 years have passed by and pro poor parties are still shouting pro poor slogans. What did they do to lift poor out of poverty? Take a look at China & other countries and how they have successfully lifted millions out of poverty.

Ask any farmer from the Greater Noida (Noida extension region) about their land. And they all will tell you, that they are happy to sell their lands. Son of a farmer who was working for Rupees 4000 a month is now driving an Audi. Sanand in Gujarat has also witnessed such boom after Tata set-up their Nano plant. Manesar, Bhiwadi, Daruhera, and Greater Faridabad are other such examples where farmers have benefited from industrialization. As depicted in chart (employment in agriculture sector in India), millions of farmers need to move out of farms to work in industries for better livelihoods. Farms can simply not feed such a large population.

We no longer live in a capitalist economy as termed by some Congress and Left members. Instead, we are moving towards market place economies. Anyone with entrepreneurial spirit can succeed. Capital is available for innovative business ideas and business models. Merit is the need of the hour and not doles. The more efficient or skilled one is, the more prosperous one grows. Therefore, keeping farmers on farms is nothing but hindering their growth.

Land Acquisition is an important legislation and must be communicated well by the central Government. It’s not about land acquisition; it’s all about removing poverty from India. Moving towards industrialization will mean more tax revenues for the government which then can be used for social welfare schemes for the benefits of poor.